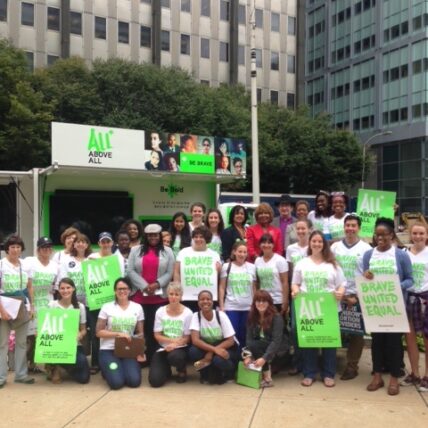 Like many movement networks, the Coalition for Abortion Access and Reproductive Equity (CAARE), was started by a group of leaders who came together because what they were doing individually, in their own organizations, wasn’t enough to realize their social change missions.

The seedling idea for CAARE was born long ago – in 1993 when the newly created National Network of Abortion Funds (NNAF)joined the C.A.R.E. Coalition (Campaign for Abortion and Reproductive Equity), an effort led by the National Black Women’s Health Project. The Coalition fought to change the policy that prohibits Medicaid dollars from covering abortion, making it effectively inaccessible for most low-income women. This coalition, and subsequent efforts to work on the same issue over the next decade, helped to set the stage for CAARE.

In 2009, NNAF asked for MAG’s support in developing their organizational strategy, including work to create a new coalition and a long-term, multi-pronged strategy for restoring coverage. The environment was complex and uncertain, the opposition was gaining ground, including attacking state-level coverage of Medicaid for low-income women. MAG asked: what would it take to move on this issue? What kind of power was needed? NNAF decided it was time to talk to their allies and boldly explore new ways of working together.

Together with National Latina Institute for Reproductive Health, NNAF asked MAG to facilitate a groundbreaking convening of leaders in the movement. Prior to that convening, MAG interviewed over 35 leaders and discovered that people were committed – heart and soul – to abortion access for low-income women.* Many of those interviewed had been part of the earlier efforts and thus already had working relations with each other and NNAF. This commitment among individual leaders was deep even when their organizations were not completely focused on the issue, but nobody knew how to win and people were tired of losing ground in other areas of abortion access, particularly health care reform, which made them reluctant to take up the fight for public funding.

At that first convening, MAG worked with the leaders to harness these reactions to the current state of affairs, hold them, and create a safe space for people to generate new ideas and possibilities for moving forward together. The group decided to create a smaller working group that would meet, plan, and deepen relationships over the next 18 months.

MAG facilitated the meetings of this small working group where CAARE was eventually born. The group created a vision and plan for CAARE that was flexible and adaptable in order to address the challenges of operating in the political environment, yet would enable them to try some things out, innovate, and take risks. They also created a shared agreement on how they would work together – which has been key to CAARE’s success.  Organizational leadership was expanded beyond the two original co-conveners and a steering committee and several teams were created – more voices and ideas emerged.  CAARE hired Silvia Henriquez as a part-time Coalition Director and the pace and depth of the work grew.

The very tensions that exist throughout the broader movement (often the broader society) are also always present within movement networks. MAG supported the organizations in CAARE in seizing this opportunity to generate a new way of working together while navigating larger power dynamics within the movement – race, class, power, organization size, organization politics, and nimbleness – to build power for the long haul. A key factor to CAARE’s success was the decision by NNAF and NLIRH to move forward with the many groups who were most committed to engagement, which did not initially include active participation of the largest groups. At the same time, there were ongoing efforts by CAARE to draw in all of the players. Everyone does not agree all the time, yet with MAG’s support the group has built a willingness to have difficult conversations with honesty and compassion.

The structures and guides for working together played a big role in supporting CAARE in working through these dynamics. Through these guides, they were able to name the tensions. For example, early on they created a set of guiding principles for how they would address raising and distributing funding and building a public facing campaign. These agreements allowed the group to navigate differences in organizational size, budget, and visibility while generating new opportunities and while continuing to center leadership in the groups representing the low-income women and women of color most affected.

MAG helped catalyze this by creating the conditions for the group to work together – not by creating solutions. CAARE acted as a container in which leaders with different opinions could experiment, buck traditional wisdom, and think generatively about where they might begin in moving this issue.

MAG’s success in creating this space with CAARE was informed by a deep experience with movement network formations and an ability to ask hard and provocative questions and to support leaders in breaking out of stuck places.

“MAG has supported CAARE with thoughtful and creative facilitation that allows us to openly deal with conflict, consider where we’ve been and where we need to go, and keep moving forward with integrity. In fact, to call MAG facilitators doesn’t really capture all they have done – Robin and MAG are real partners in CAARE.”

Getting to new ideas in a complex world

CAARE, though still in its early years, is starting to make progress. With NNAF and NLIRH as co-chairs, CAARE has now raised millions of dollars over several years.  CAARE has created the All* Above All Campaign to help raise the profile of the issue and the constituencies most affected.  CAARE developed a federal strategy, local and state level laboratories with key partners to innovate practice, and movement building efforts to reach across to leaders in other issues and movements.

A core team of leaders from deeply invested organizations works to weave all the strategies together.  They feed what is working, seed new ideas, and add missing strategic elements as needed.  They ensure the whole of CAARE is responding to the complex environment without losing sight of the end goal.

To stay nimble and adaptive, MAG also helps CAARE re-assess itself every year or two. They check-in, assess how they are doing, adapt to feedback, and recalibrate. As a result, the network has changed a lot since its inception and continues to learn as it tries out new ways of working together and new approaches to winning abortion access for all women. New experiments in supporting leadership development and having challenging conversations across race are planned for the next iteration of MAG’s work supporting CAARE.

For more information about the successes of these efforts, please check out All* above All.

*This coalition of over 300 members worked to overturn the Hyde Amendment, which prohibits low-income women from using their Medicaid health coverage to obtain an abortion. Ultimately, while the coalition did not repeal the Hyde Amendment, it did achieve a victory by having exceptions for rape and incest written into Hyde. Building on this effort, NNAF spearheaded national coalition work on this issue over the next 15 years, including C.A.R.E. 2000, the 2004 Campaign for Access and Equity, and in 2006, “Hyde  — 30 Years is Enough Campaign.” This work deepened alliances with the groups that worked together and drew in newer reproductive justice organizations and leaders. The work also demonstrated a need to fight simultaneously on many fronts – federal and state, communications and grassroots organizing, as well as continuing to provide direct assistance to people in need of abortions.  NNAF and a key partner, the National Latina Institute for Reproductive Health (NLIRH), also grew in capacity in this period, enabling them to take on a new major effort.