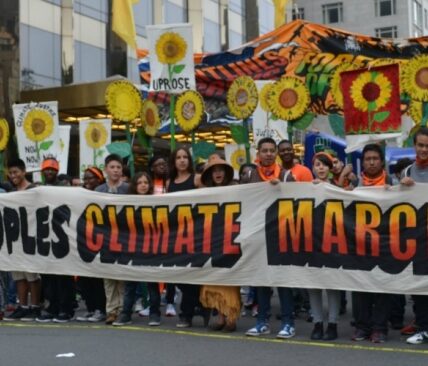 At the one-year anniversary of Hurricane Sandy, when thousands were still displaced from the hurricane and politicians had done little to reduce climate pollution, 350.org sought to bring communities together to sound the alarm on climate change. This initial network building effort and mass mobilization – Turn the Tide – laid the foundation for the 2014 People’s Climate March.

As participants in the Network Leadership Innovation Lab, May Boeve, Executive Director, and Phil Aroneanu, U.S. Managing Director and Co-Founder, launched an action learning project centered on their Hurricane Sandy efforts and bringing their networked approach to the next level. The resources and support MAG (now Change Elemental) brought to 350.org through the lab helped make these efforts a great learning experience for May, Phil, and the folks at 350.org as well as big successes in the movement for climate justice.

Like many movement network efforts, the networks created for Turn the Tide and the People’s Climate March had challenges. MAG and the other lab participants supported May and Phil in addressing these challenges through coaching sessions, peer coaching, feedback on project plans and intermediate outcomes, and other supports provided during lab convenings. Phil said, “during the first lab [Convening] we had an opportunity to reflect on our work with the Sandy recovery work—intellectually and relationally. We were able to discuss cross-movement work. The lab was useful to think through [the March] in a supportive space.”

Working with a diverse group of stakeholders typically raises issues of race, power, and privilege, as well as issues related to organization size and scale within the network. These dynamics are especially poignant in relations between traditionally white, environmental organizations and communities of color seeking to work together. MAG and other lab participants accompanied 350.org as they forged new and more trusting relationships between 350.org and the expanding network of social and economic justice leaders behind Turn the Tide.

The lab afforded May and Phil connections to other experienced network leaders, particularly several leaders of color, who were able to help with navigating these dynamics. MAG’s approach to doing this work with 350.org (and with other MAGLab participants) was to embrace these challenges, which touch on deep questions of values – and ultimately resulted in a greater ability to work across boundaries of race, class, and movements.

Because of the action learning project, we’ve been able to develop deeper trust among a wide variety of national and local groups here in NYC, which makes it somewhat easier to navigate some of these tough [network] issues…. We’ve been able to build on these relationships and deepen them through our work on the People’s Climate March.

As the leadership of 350.org found itself going deeper into networked space, it was a challenge for both May and Phil to think through their roles within their organization and their responsibilities to the networks, particularly since 350.org was going through internal leadership transitions. Coaching with MAG and peer connections through the lab helped them manage the divergent pulls towards the internal work and the external relationship management, increasing their ability to navigate many roles and to decide when to lead and when to step back in networked spaces.

Throughout the process, MAG worked with Phil and May to continue to stay focused on the big picture learning goals. May said, “the main tangible outcome [of the action learning project and Turn the Tide] has been greater transparency and community engagement in how NYC and NYS are spending money on Sandy recovery….and the closer coordination and trust between 350.org and a whole range of groups in New York and nationally. It has helped broaden the tent of the climate movement and set the stage for our work on the People’s Climate March, a scaled-up effort.”

Finally, through the action learning project, 350.org was granted a stipend. This stipend was essential in making the logistical coordination of the march through a partner – itself a networked approach to resourcing – much more manageable. It meant that staff time needed to focus on coordination was paid for – something that is often a struggle for social justice organizations.

Laying the Foundation for the People’s Climate March

Turn the Tide helped set the stage for 350.org to scale up their efforts for the People’s Climate March. MAG and other lab participants worked with May and Phil in thinking through how to use their existing base from Turn the Tide to broaden the base of engagement for climate justice. This included thinking through how they had addressed conflict and tensions head on during Turn the Tide planning and how that might impact their People’s Climate March planning. May says, “we have also identified key areas of conflict (both interpersonal and political) and in most cases opted to go right for them. That has led to personal growth for our whole team, including our executive team.”

MAG also supported May and Phil in learning from the role they played in Turn the Tide. Some key issues that surfaced included determining how to balance being a logistical organizer of events, which requires a lot of transactional work, while building transformational relationships with partners required for movement networks to be successful. MAG and other lab participants coached May and Phil in thinking through their role in framing issues for the climate march, helping them focus on what they bring to the table, and learning how to build true partnerships despite vast differences in organizational size, resources, and nimbleness.

We leveraged the lab relationships, and were informed by the network for the People’s Climate March. Not accidental that this grew out to the big march with groups that weren’t climate focused…it was a good sounding board, relationships we could really lean into.

Finally, May said, “the action learning project really affected how I think about networks…[it} affected our decisions, our programs. The early work was informed by the lab, the action learning project, and the steps taken after. For example, how to propose the bigger march and test it, and we hired a consultant to set up the process and set it up well from the beginning. I heard this from the [other lab] participants. The lab reminded us to have the common purpose and build the relationships.”