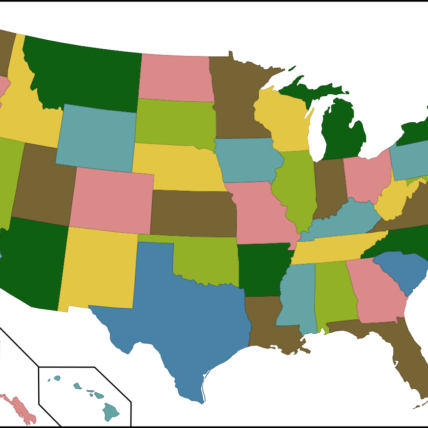 Building power at the state level matters. Of course, this is not a new idea: Over the past several decades, political analysts, organizers, and local practitioners have increasingly emphasized that—although national policy often receives greater attention and focus—developments at the state level are of vital importance in creating change that affects the daily lives of millions. There has been a corresponding push within philanthropy to acknowledge these realities.

The factors increasing the importance of state-level work are growing ever more pronounced: First, gridlock in Washington, DC inhibits what can be accomplished at the national level; it turns the states into critical battlegrounds for defending vulnerable populations against regressive laws, regulations, and cultural narratives. Second, states can offer some unique opportunities for bringing local power and victories to a wider scale; more than ever, critical innovations are emerging at this level. Third, wins that are replicated across multiple states can build momentum for national change.

Viewed broadly, states can be seen as building blocks for creating progressive reform and promoting a transformational culture shift that embraces a vision of love, dignity, and justice. The states are all important in different ways—like a Jenga set—and not simply stepping stones to national policy and electoral change.

The Ford Foundation’s efforts to create a coordinated state strategy initiative can help inform other foundations hoping to rethink their state-level investments. Through a partnership with Management Assistance Group (MAG) and the Program for Environmental and Regional Equity (PERE) at the University of Southern California, Ford was able to rapidly re-envision their state-level investments and ultimately committed to fund its new state strategy initiative for the next five years.

Making organization-wide decisions about strategy, which carry across departments and working groups, is never an easy task. When resources and departmental budgets are involved, the discussion is invariably intensified. That the Ford Foundation, in a very brief period, was able to create alignment across the organization about a new state strategy represented a remarkable development, one that required dedication to internal communication and collaboration. A climate of political urgency and a carefully designed consulting engagement helped make the accomplishment possible.

A State Strategy is Key to the Foundation’s Mission

In the early fall of 2016, the Ford Foundation was beginning to live into their primary mission—announced in 2015—of combating inequality in the United States. As they were learning about what it would take to advance this mission, they decided they needed to adopt a more unified approach to promoting progressive governance at the state level. November 2016 raised the specter of inequality rising in the future and brought a new sense of urgency across the organization, fueling a desire to design and implement this new approach without delay.

The Ford Foundation was already making a number of place-based investments in states including New York, Louisiana, and Michigan. However, the participation of its various programs, or thematic areas, in the initiatives was not coordinated. The foundation was challenged with determining how to coordinate efforts and maximize joint impact on place-based initiatives across the organization. The foundation also wanted to identify a larger number of states for targeted investment.

To promote a shift, Ford asked a number of critical questions: What is the best approach to creating a state-level strategy for our organization? How should we choose which states to target for strategic additional investments? And how must we adapt our internal culture to implement this new initiative?

Making a Commitment to Progressive Governance

In the fall of 2016, the Ford Foundation engaged MAG and PERE as partners in these efforts. The engagement aimed to allow the foundation’s leaders and program officers to think comprehensively about what adopting a state strategy would mean and what it would take to turn it into a meaningful commitment for the organization. The participants envisioned the engagement as a rapid four-month decision-making process that would build on a three-year internal project to explore state-based investments.

PERE brought to the engagement a framework for understanding how change at the state level happens; this framework was rigorously researched and published prior to the engagement as Changing States: A Framework for Progressive Governance. In addition to serving as a research partner for the initiative, MAG facilitated a process to understand human dynamics and organizational culture, helping the foundation to identify the types of shifts needed to enact a new strategy and maximize the collaborative impact of investments across the different thematic areas.

To ensure communication and participation throughout the organization, the consultants began coordinating among several different groups at the foundation. At the most intimate level, a group of a half-dozen program staff members served as point people on the project and facilitated communication across programs. A larger number of staffers, with representatives from each of the foundation’s thematic areas, made up the State Strategy Working Group and was involved in all critical decisions about the final shape this strategy would take. Finally, at the largest level, MAG and PERE held two major meetings attended not only by these actors, but also by Ford directors, vice presidents, and other staff. These meetings were designed to foster organization-wide alignment about the creation of a state-level focus.

After several rounds of research and conversation, the foundation agreed that it would adopt “building infrastructure towards progressive governance” as the guiding principle in its state strategy.

“Progressive infrastructure” refers to the individuals, institutions, and networks that can challenge (and influence) the configurations of power—social, cultural, economic, and political—that produce inequity. It is rooted in the values of justice, inclusion, and democratic participation. Infrastructure requires investments that are sustained, not episodic; multi-sector, not special interest; wide-ranging, not single issue; constituency-based, not intermediary-driven; and focused on transforming people’s lives, not just on changing policy.

“Progressive governance” refers to a level of power that translates into the ability to implement and sustain long-term change that can further economic and social inclusion and reduce inequality. By focusing on progressive governance, the goal extends beyond campaigns and policy victories to their implementation, replication, and consolidation. While this involves building power in the electoral and legislative arenas, it also means being able to influence decisions, both public and corporate, in how to implement and protect policy and legal wins. Further, it includes the ability to change and control structures, to shift dominant narratives, and define worldviews.

While building toward progressive governance in all 50 states is ultimately necessary, the engagement recognized the need to start with targeted and sequenced interventions in a select number of states. With these goals in mind, MAG and PERE facilitated a process of establishing possible criteria that the Ford Foundation could use to select priority states for philanthropic investment. The criteria chosen by the State Strategy Working Group included: key demographic, economic, and political conditions; where opportunities could be leveraged; and where each state is on a spectrum of progressive governance.

MAG and PERE engaged in multiple layers of research that included interviews with grantees, Ford staffers, leaders at other foundations, and people working in various states. It also included data mining through the National Equity Atlas; quantitative analysis of socio-economic, demographic, and political trends; partnering with the Institute for Southern Studies on in-depth state profiles including interviews with state leaders; and drawing on existing knowledge of social movement infrastructure and expertise in philanthropic place-based initiatives.

Through a series of meetings, Ford staff developed and debated various scenarios for strategic investments that could promote progressive governance and progressive infrastructure in an initial set of states. Participants debated the relative merits of possibilities such as building out from Ford’s existing place-based commitments to choosing new states that presented a diversity of conditions, arenas for change, and capacities.

With sustained attention and leadership by the State Strategy Working Group, the foundation ultimately decided on several states to target for investment in the coming years, in addition to existing commitments in Louisiana, Michigan, and New York. The foundation also garnered commitments from Ford’s BUILD initiative, Ford leadership, and each thematic area to fund these investments together for the next five years.

Ford’s cross-organizational financial and strategic commitment is remarkable, and it demonstrates the importance of internal communication and attention to collaboration.

To advance these ends, the engagement with MAG and PERE was attentive to how the strategy would be realized once determined, in particular how collaboration would happen across departments and thematic areas—all of which have their own budgets, goals, and pre-existing commitments.

One step toward addressing the challenges of collaboration within a complex organization is simply to have participants name the difficulties. Too often these dynamics remain implicit, and unspoken tensions between departments or program areas inhibit collaborative processes. Creating the space to safely raise conflicting prerogatives and norms that make collaboration difficult is a critical step in enabling new forms of cooperation to emerge across branches of an organization that are otherwise expected to function—and succeed—autonomously.

MAG supported these processes by conducting individual conversations with foundation staff that surfaced some of these implicit and unspoken tensions. It also conducted research on donor collaboratives to determine best practices for working across different interests and cultures.

MAG shared our learning from our research and conversations with Ford’s leadership. The lessons included reflections on the foundation’s internal culture and recommendations for how to enhance intra-organizational cooperation in order to maximize the collective impact of investments from different programs in selected states.

Upon hearing our observations and recommendations, the foundation’s leadership developed incentives and structures to ensure that the state strategy would be an organization-wide priority. Moreover, the internal working group that manages the roll out of the new strategy is carving out time to build team culture and alignment, while realistically navigating the challenges that come with any change process.

It is common for practitioners and clients alike to think about strategy engagements as requiring prolonged cycles. However, the Ford Foundation’s determination both to quickly establish a strategy and to create organizational alignment around it demonstrates that significant change can take place in a short period of time, even in a complex organization and across many different departments.

The Ford Foundation exhibited an admirable commitment to stepping back, assessing the bigger picture, and figuring out what was needed to affect systemic change to increase equality. In doing so, it provided a model for how to balance long-term vision and short-term urgencies. Of course, this requires commitment on multiple fronts to developing a culture of systems thinking, learning, and collaboration before taking action—and to maintaining this culture while moving forward with a new strategy. Together, the foundation and consultants were able to manage these demands and structure a nimble engagement, one that drew on deep experience in fostering collaboration and that benefited from a shared vision of a just and equitable world.