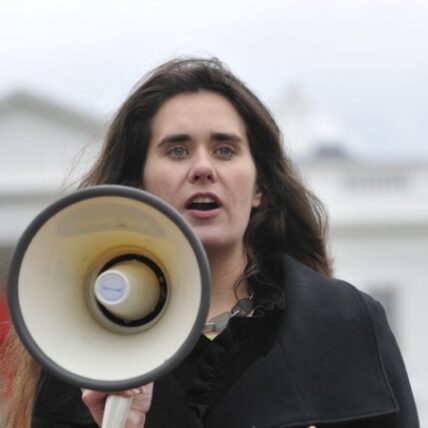 Liz has over 20 years of experience organizing and campaigning on critical issues, with a focus on both corporate and legislative campaigns. She currently serves as the Movement Strategy Center’s Network Organizing Project Director and Senior Fellow.

She was previously the Campaign Director (Executive Director/CEO equivalent) of 1Sky, a large-scale collaborative climate campaign with over 600 allies, 4,500 local leaders, and 200,000 citizen advocates. Liz managed a successful merger of 1Sky with 350.org in 2011 after helping build and execute a successful campaign on climate and clean energy.

Prior to 1Sky, Liz was a co-founder of ForestEthics, where she spent 10 years as the Organizing Director. During that time, ForestEthics’ work resulted in the protection of over 50 million acres of forests in the U.S., Canada, and Chile. Liz also served as the National Organizing Director for American Lands Alliance, the Director of Missouri Public Interest Research Group, and graduated from Green Corps’ Environmental Leadership Training Program, where she received the third Alumni Achievement Award ever given by Green Corps.

In 2010, Liz was awarded a 40 Under 40 Award by the New Leaders Council for her work. She has extensive experience in campaigning, fundraising, organizing, facilitation, movement building, training, leadership development, organizational development, staff management, and campaign strategy planning. She lives just outside of Washington, D.C. with her husband and son.